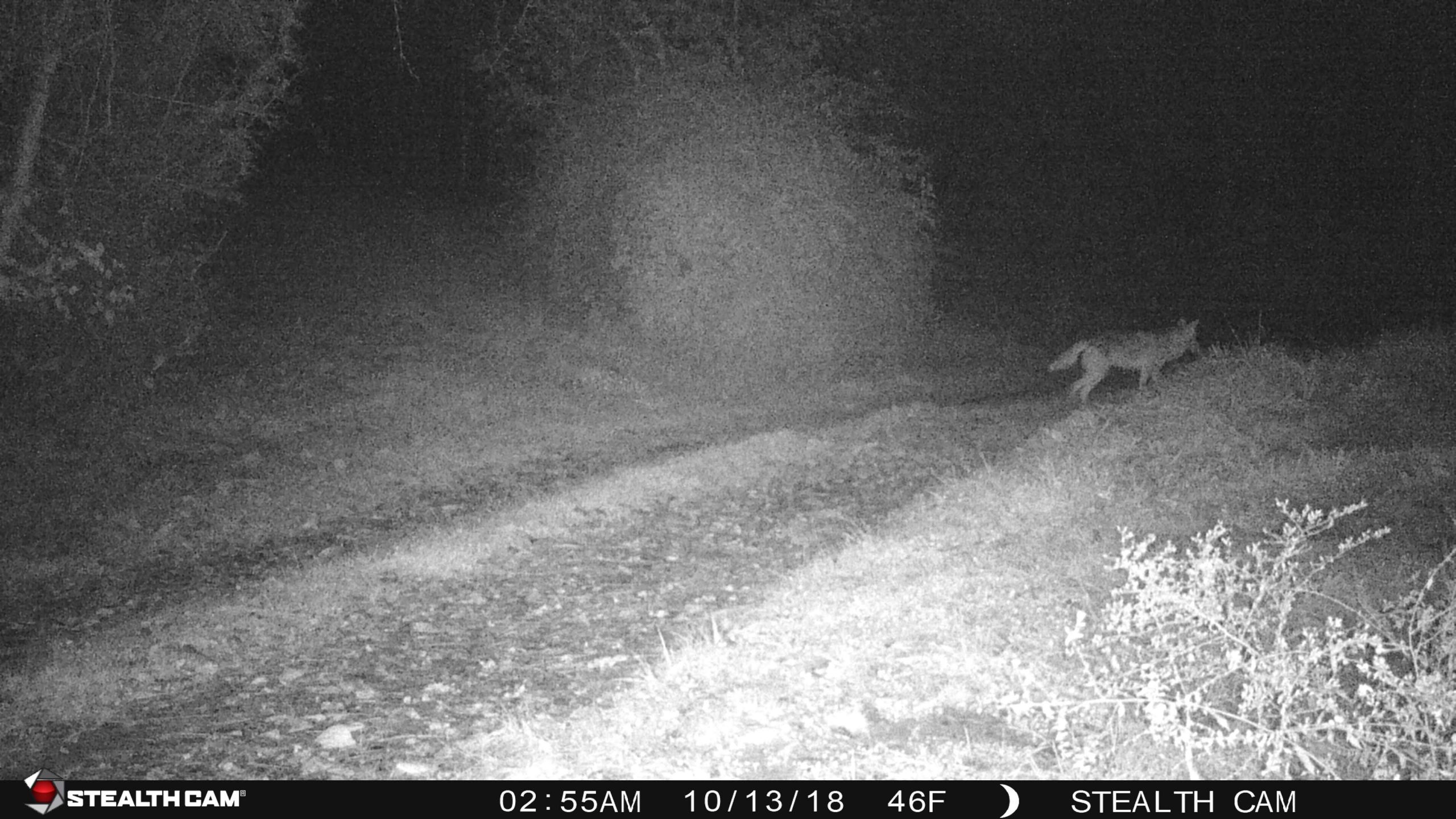 Our 9’ish months of having chickens has been full of predator issues. We free-range our birds, or we did… When you free-range predation is an inevitability. We knew we would have to deal with predators but I don’t know that we truly understood what that meant. And, we had a false sense of security having never seen any predators around…

The first predators we dealt with were the human kind. They came and took our chickens out of the coop at night (at least that’s what we figure happened). Human predators we handled by putting up game/trail cameras to capture activity on the property. But to be honest, that problem probably solved itself, and the cameras are more for our piece of mind. I think that neighbors thought the former owners of the property abandoned the chickens, and technically they did. When they left they freed their 50+ chickens on the property. So, neighbors who knew the property had just sold and saw chickens all over the place probably figured they were fair game… until they realized we were moving in and keeping the chickens.

Next we had stray dogs, one in particular who kept coming around to chase chickens. We dealt with that (not what you’re thinking, i’ll explain in a separate post). Then we had a several month lull and thought we were safe….

A few weeks ago I heard the chickens making a ruckus outside. I ran outside and could tell the chickens were upset so I looked around the area they ran from and found a patch of feathers and one of our laying hens was gone. Ok, it sucked and we felt bad for the bird, but we knew some loss was inevitable and feel that all the benefits of free-ranging outweigh that cost.

But one foggy morning I looked out the front window and saw an odd white blob in the driveway and then I looked closer and saw another black blob a little bit away.It was 2 of our chickens, not moving; something wasn’t right….  I stood there for a couple seconds processing what I was seeing. I looked a little closer and between the 2 blobs of feathers was a WOLF (red wolf, we think, otherwise a VERY large coyote…) well camouflaged in the woods and fog. I yelled for Michael and he ran out after it with his pistol at the same time it took off after another bird. Just as it grabbed the other bird Michael shot at it (we’re pretty sure he missed, it was kinda far) and the wolf dropped the bird and ran. We lost at least two birds that day, one of which was Michael’s favorite, and one bird was injured, my little lap chicken (lap-chicken’s story to be posted soon!). At that point we decided that we would no longer free-range the birds when we weren’t home, even though the attacks happened when we were home… We felt like we needed to protect them in some way but also feel that keeping them penned up is cruel and less healthy for them. So, we tried to strike a balance. Unfortunately, some of the chickens figured out how to escape the coop and over the next 2 weeks we came home several more times to find chicken carcases in our driveway, killed but not eaten. Now, we’re left reevaluating our chicken philosophy. Those are the facts, now let’s discuss…

Our flock was being whittled down by some other predator in a series of attacks. We did see one of the attacks and the wolf/coyote that committed it. But, since we didn’t see the others, we can’t be sure all the losses were from the same predator. The majority of the birds that were killed were just left there. The predator didn’t eat them or even take the kill with them, in most cases. There are 3 birds that were eaten/removed from the place they were killed. So, that may mean at least two different predators (the ones killing to eat, and the ones killing for sport)… but we don’t know. Our cameras were placed to catch human predators which means we need to place more cameras in different locations but we’d rather stop the killing than film it. I’ll tell you the truth, my initial reaction was blood-lust. I wanted that wolf dead and his pelt to be a new rug for my floor…….

But, I happened to be reading a book called “Prodigal Summer” while this was going on. In this book one of the main characters is a wildlife person who specializes in apex predators, like wolves and coyotes. The book shows through a story how important apex predators are for the environment, all the negative effects of the removal of apex predators, and the benefits of allowing them to co-exist with us. Basically it goes like this: apex predator is eradicated > the population of the prey animals being kept in check by the apex predators balloons > the food of the prey animals gets decimated due to over-consumption by the now huge prey population > erosion and other negative environmental impacts increase due to loss of plant growth and increase of large herbivores trampling steam banks and such, which can lead to many other issues, as well > the end result is an ecosystem that is all out of whack! The best example of this that I have come across is from the reintroduction of wolves to Yellowstone in 1995. But, the truth is that explanation is over-simplified; it’s much more complicated than we can understand with our limited knowledge of the interconnectedness of the environment around us. So, while we take “apex predator theory” into consideration it’s important to note that simply stopping the killing/removal of apex predators, like wolves and coyotes, isn’t all there is to maintaining a balanced ecosystem. There are examples of wolf and coyote overpopulation too; this is another type of imbalance and the one that most homesteaders feel is the bigger problem. These predators are our competitors in a situation where we share the same land and the same food source, chickens.

We also read (listened to the audiobook) Ishmael by Daniel Quinn during this time. This also talks about man attempting to dominate and control nature and the havoc that can cause. One part of the book that stands out in my mind talks about what Quinn dubbed “totalitarian agriculture” or, in part, the elimination of competition as a means to dominate and control nature. With the end goal of directing resources (food) to man and not other “lesser” species. Let me try to describe briefly, without diving too far down the rabbit-hole. Man eliminates competitors for its food source (i.e. other apex predators and animals that destroy crops) > man eliminates it’s food sources competitors (i.e. weeds and such producing a monoculture of ONLY the food that man wishes to be there). This would lead (is leading) to a significant loss of diversity. Diversity is important for many reasons but the one focused on by the book is that as diversity decreases the chances of ecosystem collapse increases. Think about that for a second… we are currently losing species at an alarming rate. We’re in what is being called the 6th mass-extinction event here on planet earth. We, humans, are a large part of the cause of those extinctions via habitat destruction (both intentional, like deforestation, and unintentional, like oil spills), killing of competitors (both our competitors and the competitors of our food sources), and over-consumption.

The wolves that originally lived in Southern Appalachia are said to be extinct. The red wolf which is believed to be a wolf-coyote hybrid is endangered and one of the rarest wolves in the world. Luckily, or unluckily, we haven’t seen the wolf other than that once but we have found more birds killed and not eaten. Now, if the birds were being eaten I could probably just go with the “fish gotta swim, birds gotta eat” proverb. When you plant a garden you’re supposed to plant extra knowing that the birds, squirrels, deer, etc will eat some. So, maybe we just get more chickens than we need knowing that the wildlife around us deserves to partake in our bounty, as we partake in its bounty. But this creature is killing and not eating… that’s different. I have read that this happens at certain times of year when the adults are teaching the pups to hunt but… we didn’t see any pups so it’s hard to know if that’s the case when there are plenty of people out there who will tell you wolves and coyotes kill for “no reason” or “fun”.

So, what’s an ecologically conscious homesteader to do when a red wolf starts killing their livestock? I honestly don’t know… I know that’s not a very satisfying answer, but it’s the truth. It’s not as simple as you might imagine at first glance. We humans like our solutions wrapped up in a labeled box with some good instructions and a pretty bow on top. But life isn’t like that, and homesteading is definitely not like that. For now, we will do what we can to protect our birds while maintaining a balance between over protection and no protection as best we can. And we’ll hope the wolf won’t come back… If it does *maybe* we can have it relocated, but I doubt it. If you have any great solutions other than “kill it” we’d love to hear them!

I will leave you with this thought: Man is a part of nature, not apart from it.