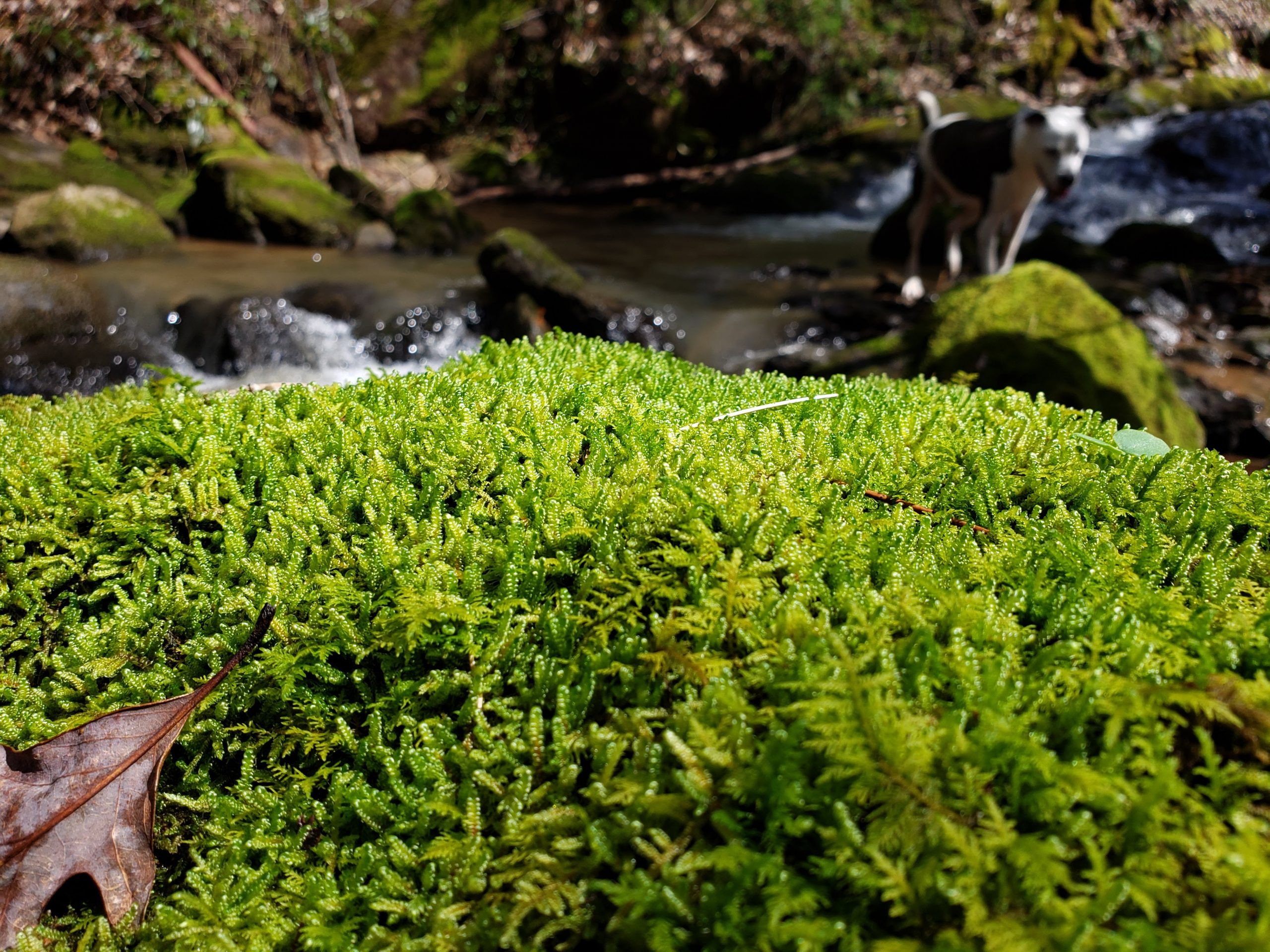 A couple of generations ago useful plant and mushroom knowledge was something that nearly everyone had. These days it’s rare. I read recently that people now can identify more company logos than they can plant and/or animal species. More specifically, the assertion was that children could identify thousands of company logos but fewer than a handful of local plants and animals (although I can’t access the original study from which these findings are cited). I find that incredibly sad, even though I only recently began to see what I was missing. We are so disconnected from the earth that we live on, and the nature that we are a part of, that we don’t have any idea what’s really going on around us. I’ll try not to get too philosophical here but if you’re interested in that I can recommend some good books (I’m putting together a list I will link here)!

Nathan (Sarah’s brother), Sarah, Becky (the foraging teacher), and Bailey on our foray.

Having been fortunate enough to grow up before the age of social media and tiny portable computers, Michael and I both spent a lot of time outside as children, playing with bugs, building forts, and getting dirty. My family had a garden, Michael’s had some farm animals; we both knew where our food came from, for the most part. Even so, neither of us were raised with the knowledge of the names and uses of wild plants (and mushrooms) around us, nor the framework for how to identify these things. Being new to Southern Appalachia made the limited knowledge we did have less applicable. Feeling it was important to remedy this lack of knowledge and connection we’ve been slowly learning about the world around us. We found an expert in foraging and Southern Appalachia and hired her to come to the property and show us the bounty in our woods and meadow. I will share some of the specifics of what she taught us soon.

An important part of permaculture and being a good steward of land is observation. Through this observation comes understanding. So, as we take our hikes around the property we observe all we can about it. Where is the water flowing and how does that change over time; what’s growing, blooming, or fruiting where and when; what kinds of soils are where; what different micro-climates do we have? The more we observe and learn the more we hunger for knowledge and understanding.

Overlooking a section of the creek that has drastically changed numerous times in our <year of visiting it. A storm knocked the tree down and that changed the flow. Then another storm pushed the tree and scraped away some of the creek-bed changing the flow again.Some of the groups I am in on Facebook.

We are finding that knowledge anywhere we can. There are some great books out there, but sometimes they can be a difficult starting point. Surprisingly, a great place to start is Facebook. I joined a bunch of plant and mushroom identification groups on FB and started watching what people were posting and what answers they were getting. You do have to be VERY careful because there are a LOT of people who confidently comment incorrect identifications (it’s really quite frightening!)– always verify the identification via at least 3 sources (preferably at least one knowledgeable human you trust), especially if you’re planning to eat it! Even so, FB groups are still a great way to see a wide variety of species in a wide variety of settings and developmental phases. Incorrect identifications can be a learning experience too, you can look for similarities between the confused plants, and differences. Thinking through this allows you to learn from someone else’s mistake. Over time, I started to recognize the plants and mushrooms as they came across my feed and started to treat the ID groups as flashcards and quiz myself. If I don’t know, or want to confirm my guess, I can open the comments and see what other people think it is. I can google the binomials for more information, pictures, and identification tips.

Be careful with common names! Common names vary from location to location and person to person. I have seen at least 4 completely different species called “pigweed”, for example. Always identify a plant by its Latin binomial to ensure accuracy of the identification.

Some Cantharellus cinnabarinus, or Chanterelles, we found on the property after seeing the coveted mushroom online and in books.

It’s really exciting to meet a plant or mushroom in person the first time after seeing it online and in books for years. It’s probably my version of meeting a celebrity! The coolest part is when I meet these plants and mushrooms on our property I can get to know them in ways that most of us will never get to know any celebrity. I can establish an intimate relationship with each plant and mushroom. I get to know what they look, smell, (and if it’s safe*) taste, feel, even sound like.

I heard an analogy once that went something like this: There’s no such thing as a look-alike; it’s all about how well you know them; this applies to people and plants. People who don’t know me well may mistake me for other people with long red(ish) hair. People who do know me well wouldn’t make the same mistake. If you only ever saw one photo of a person (or plant, or mushroom) online and then were asked to pick them out of a lineup (or field, or woods) of similar looking individuals you would probably have a hard time. But if you saw 100 photos of them, it’d be easier. If you met them in person, in their typical habitat, even easier. Once you looked at them closely in person, making note of all their features, held them, smelled them, tasted* them… then you would probably recognize them anywhere. It’s crazy what happens when your eyes are opened to the more-than-human world. Everywhere you go you will start to see your new plant and mushroom friends. Going to work, school, and the store you’ll start to recognize them in parking lots and roadsides.

One of the Amanitas we found on the property. We’re not sure of the exact species but the warty cap, remaining partial veil, and bulbous base are the clues that lead to Amanita.

*It should be noted that (again, kinda like people) some plants are NOT safe to put in your mouth. Some plants are not safe to even touch (I’m lookin’ at you, poison ivy). You should not move on to that that level of getting to know a plant until you know who it is and that it’s safe. No one wants to break out in blisters (or die), ya know? Unidentified mushrooms on the other hand, are safe to touch (allergies aside), even the deadly ones. We have about 3 different species of deadly Amanita mushrooms (some are also called Death Angel or Destroying Angel) growing all over the woods. I have touched them multiple times, broken some apart with my hands looking at all it’s pieces. I am told mushrooms are all safe to put in your mouth and chew, as long as you don’t swallow (I, personally, am not that brave and can’t recommend it– DO NOT put Aminita’s in your mouth). The chew and spit test is a part of telling certain species apart. I won’t lie, I licked a mushroom to confirm it’s edibility, once. But at the time I had a professional forager standing next to me telling me how to confirm the species of Lactarius, and that required licking the milky excretions of the cap.

I challenge you to learn something new about the wild life around you this week. Go out into your yard. Find a plant you don’t know what it is and try to identify it. Join a couple ID groups. While not specifically an ID group, the Mountain Bound Community group is a place where we can discuss plants and mushrooms, too. To get a good ID it’s important to take clear photos. Take photos in the specimen’s natural surroundings whenever possible and always note where you found the mushroom setting wise as well as map/geographical location. For plants, get a clear close-up photo of each part, leaves (top and bottom), bark, branches, flowers, and fruit.– these are all the parts that are important to look at when identifying a plant. For mushrooms, take a photo of the top of the cap, under the cap (to see the pores, gills, or other structure), the stipe (stem), and the base of the mushroom. You may also need to get a spore-print, cut the mushroom in half, poke it to see if it bruises, and/or lick* it. Take the time to learn the names of different parts of plants and mushrooms too. This is part of the foundational knowledge you will need to begin your relationships with plants and mushrooms.

Infograph I downloaded. I did not make this.